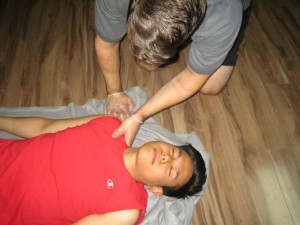 Carbon monoxide exerts its toxic effect by binding itself to the circulating hemoglobin and thereby reducing the oxygen-carrying capability of the blood. Hemoglobin, instead of normally inclined to attach itself with oxygen molecules, absorbs 200 times more readily than it absorbs oxygen carbon monoxide-bound hemoglobin, called “carboxyhemoglobin” cannot transport oxygen during pulmonary oxygenation.

Because the central nervous system has a critical need for oxygen, CNS symptoms always predominate with carbon monoxide toxicity. A person with carbon monoxide toxicity may appear to be intoxicated due to the brain tissues being deprived of oxygen (cerebral hypoxia). Other signs and symptoms include muscular weakness, headache, muscular weakness, palpitations, dizziness and confusion which can readily progress to coma if not treated immediately.

Skin color will usually range from pink to cherry-red to cyanotic and pallor. Pulse oximetry levels of victims with carbon monoxide poisoning will not reveal distressing results as it will appear to be well saturated regardless if the hemoglobin carries oxygen or carbon monoxide.

Exposure to carbon monoxide almost always requires prompt and immediate medical treatment. The primary goal of management is centered in the reversal of myocardial and cerebral hypoxia (lack of oxygen to these vital organ systems) and to expedite the elimination of carbon monoxide circulating in the system. Whenever an individual inhales a poisonous substance, the following general measures apply:

In addition, the victim with carbon monoxide poisoning, carboxyhemoglobin levels are analyzed upon arrival to the ED and before treatment protocols are initiated. 100% oxygen is administered or continued preferably at atmospheric or hyperbaric pressures to hasten the elimination of carbon monoxide. Oxygen is administered until the level of carboxyhemoglobin is less than 5%. The victim is monitored continuously.

deterioration behavioral and mental status may continue to persist even after resuscitation, then possible irreversible brain damage occurred. This might have been the result of the following: prolonged exposure to high contents of carbon monoxide, the elapsed time before the victim was found and the time it took for medical rescue was contacted and arrived at the scene, or initial emergency measures were such as CPR was delayed or not provided at all.

The information posted on this page is for educational purposes only.
If you need medical advice or help with a diagnosis contact a medical professional