Choking incidents are among the most common accidents that occur in children under five years old. It claims the lives of many children each year and poses an ever present risk. As in any emergency, the best thing to do is to prevent choking. Since babies tend to put almost anything inside their mouths, you should make sure the home environment is safe. Take note that majority of choking incidents in children occur at home.

While choking can happen anytime, they are probably most common during mealtimes. As such, babies and young children should never be left alone around food. Make sure to cut foods into small pieces, at least smaller than a pea, especially for very young children who are just being introduced to solid foods. Babies tend to swallow foods even without chewing, so make sure that the food is small enough to prevent obstructing the airway. Do not give the baby lots of pieces of food at once, for example on their feeding tray. Babies
will usually stuff their mouths instead of chewing the foods completely, one piece at a time. Teach children proper behaviors at the table, so they will not play, run around or lay down while eating. These unsafe practices increase the risk of choking in children. 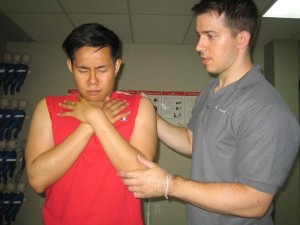 Certain foods cause choking more commonly than others. Be sure to avoid giving them to babies. Some examples of these foods include:

Many parents are not aware that foods that are very thick, or chewy (such as peanut butter or gums), or solid foods that are not small enough (such as raw vegetables or small fruits), are particularly dangerous. Make sure your child is old enough before introducing these foods, or that they are properly prepared. Never, give chewing gum or whole nuts to very young children.

Although food products are the most common cause of choking, there are other hazards around your house. Make sure to avoid leaving small items such as batteries, paperclips, coins, buttons, pen caps, and jewelries lying around low surfaces. Any toys or items with small, detachable parts are not suitable for babies to play with. Keep them away from children’s reach. Similarly, balloons and its parts can cause choking in very young children.

Give your baby age-appropriate toys. Always check the manufacturer’s age guidelines before buying any toy. Moreover, be extra cautious with any plastic, such as cling film or polythene. These thin surfaces can form an invisible seal over the airway of the baby.